Over the years there have been a number of fatal accidents involving some very experienced air display pilots, without any satisfactory answer as to the root cause. Usually it’s just eventually put down to another case of pilot error – but the big “WHY” – the common factor at the root never seems to be answered. Just what motivated these pilots to cut the safety margins never seems to be adequately explained. Following an accident there’s always much conjecture within the air display fraternity but with no real answers other than the usual nonspecific conclusion of pilot error – he didn’t have enough height is more often than not blamed - that’s always true but it doesn’t begin to explain why he didn’t.

Since witnessing the fatal accident of a close friend and colleague on the day of my first public aerobatic display in 1972, and through the years following the tragedy of other air display accidents, the nearest I’ve come to an answer is that impulsive behaviour played a part. In most cases that will certainly be true but it still doesn’t get to the root cause - WHY?

My searches for answers led me to the original research of David Beaty into human factors. David Beaty was a twice decorated WW2 pilot who went on to fly the Atlantic route for BOAC in the days when the pilots flew through the weather with the necessity of a landing for fuel in Greenland or the Azores.

Beaty noted that accident investigations tended to end up blaming the pilot unless something specific was found wrong with the aeroplane. He felt that even if an error had contributed, there had to be a reason but nobody was searching for it. Beaty set himself that task after seeing colleagues who were amongst the best and most experienced in the profession found guilty of pilot error and, those that survived, dealt with accordingly. Importantly, the consequence of this was that nothing much was being learnt towards the prevention of further accidents.

I would guess that it was over a lot of years that he formulated most of his hypothesis, but to give credibility to his findings, and be taken seriously, he took time out to qualify as a psychologist. David Beaty was already a successful author of several books and in 1969 his first non-fictional work was published – The Human Factor in Aircraft Accidents. There’s a later adaption of his work which was originally published in 1991 under the title of The Naked Pilot. 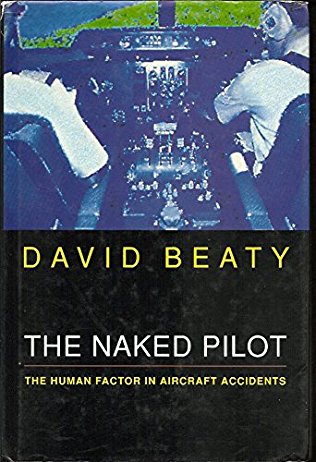 There was, and still is, a common view that human error accidents are inevitable but Beaty believed that with a better understanding of our human frailties many accidents could be avoided. His findings weren’t immediately accepted in the aviation community and it took some years before the value of his research was acknowledged and he was awarded an MBE for his services to aviation. Nowadays a study of human factors is a compulsory part of pilot training but I had to go back to Beaty’s original work in 1969 to fully understand the human factors that all air display pilots should positively identify with.

An air display pilot is an entertainer – the spectators are his audience. It’s an absolute human factor that any entertainer has a primary desire to please, in some cases an overwhelming desire to please, for example, if there are people in the audience who are special to the performer. Beaty devoted a whole chapter of his book on the ‘Desire to Please’ under the heading of Hidden Human Factors in Aircraft Accidents.

Now, consider our display pilot – he has already proved his skill level with a Display Authorisation just to be part of the show, but the pressure for him to put on a really good show is ever present in his desire to please the organiser and spectators. The temptation to make the show more exciting, even spectacular, can manifest itself in flying lower than practised, adding unpractised figures or even continuing a figure when gate speed and height couldn’t be achieved, rather than breaking and repositioning. I can only speculate that the decision to do these things is most likely to be an impulsive one (another important human factor) but the most probable common denominator springs from a ‘desire to please’ and I believe that’s as near we’re ever going to get to explain the root human factor, which answers the question WHY.

However, Beaty also came to the conclusion that in any particular accident there could be a number of other human factors involved, which would be cumulative in the negative effect on the pilot’s judgement. In the case of the air display pilot these could include – peer pressure, stress, anxiety, fatigue, frustration, lack of concentration, fitness or significant personal problems, to name but a few.

So, what should the air display pilot do to ensure his personal safety over and above maintaining his necessary handling skill? I would suggest absolute awareness of all these human factors – especially impulsive actions and recognition of the penalty of poor judgement in the desire to please – this is surely a vital part of the safety insurance and maintaining the discipline needed not to fall into the trap. The basic rules of display flying are the same as always. Only fly what’s been practised, always allow a margin for error knowing the gate speed and height of all the figures in the programme and be prepared to break and reposition if the show is going pear shape – the spectators will almost certainly see it as part of the intended display without any loss of enjoyment.

→ Back to Barry's Articles